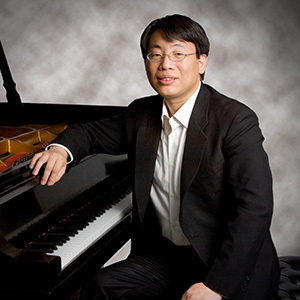 An active performer, Hu performs extensively in Asia, Europe, and America appearing as a concerto soloist, recitalist, and chamber musician. His recent performance highlights include concerto performances of Rachmaninov’s Paganini Rhapsody, Mozart Concerto No.9, Schumann’s Concerto in A, Gershwin’s Rhapsody in Blue, solo and chamber recitals in China, Taiwan, Korea, Indonesia, Ireland, Canada, and throughout the U.S. Hu’s performances have been broadcast in “Performance Today” through NPR stations across the U.S. as well as in Taiwan, China and Japan. His CD albums “Formosa Caprices”, “Complete Rachmaninov Etudes-Tableaux”, and “Goldberg Variations” have received critical acclaims.

Hu involves with the community and has served in various professional organizations and committees. He is frequently invited to give lectures and masterclasses in various venues, as well as to judge international and national competitions. Hu has served as the Artistic Director of St. Andrews Piano Academy and Festival International in New Brunswick, Canada.

Hu holds a Doctorate of Musical Arts in piano performance from the University of Michigan, a Master’s degree from Taipei National University of the Arts, and a Bachelor’s degree in civil engineering from National Taiwan University. His piano teachers include Arthur Greene, Hung-Kuan Chen, and Tai-Cheng Chen. Hu is currently the Sandra G. Powell Endowed Professor of Piano and the keyboard area coordinator at the University of Tennessee in Knoxville.